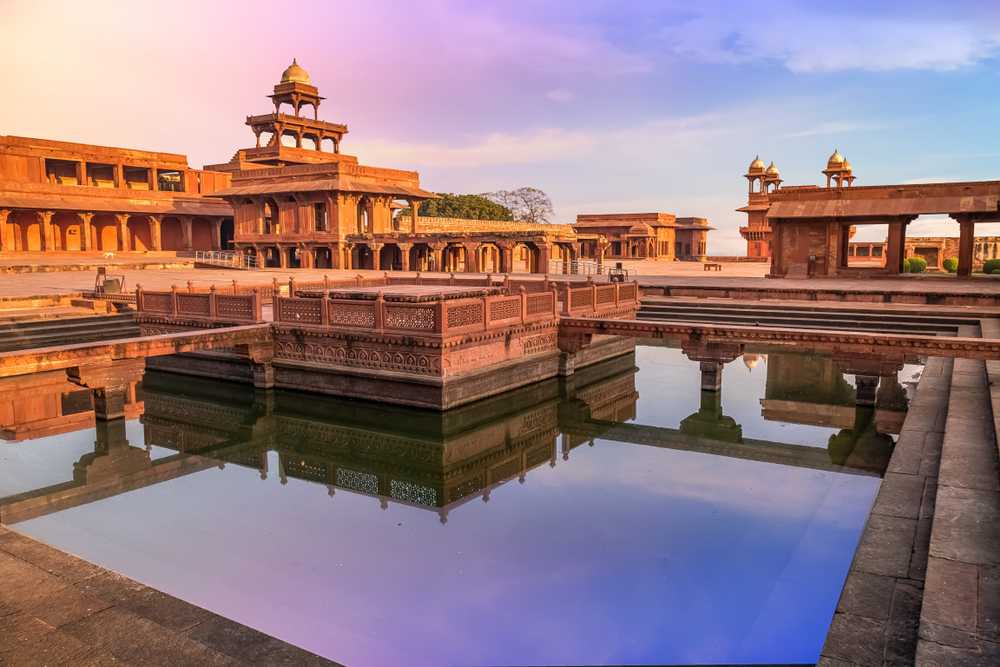 "The Pride of Mughal Empire"

Located at a distance of 40km from Agra, Fatehpur Sikri is a town in Agra district and a famous tourist attraction. A city predominantly made of red sandstone, Fatehpur Sikri was founded in 1571 century by Mughal Emperor Akbar. It is essentially a fortified city built by the king and had been the capital of his Empire for fifteen years. Now a UNESCO world heritage site, it is home to Jodha Bai's Palace, Jama Mosque, Buland Darwaza, and Tomb of Salim Chisti among many other famous monuments

A unique blend of architectural excellence, as well as religious beliefs - sums up Fatehpur Sikri. It was built by Akbar to honour Sheikh Salim Chisti, whose prediction of the birth of a Mughal heir came true while Akbar was visiting the then city of Sikri. In honour of the prophecy, Akbar built this city and Jama Masjid, a stunning mosque which is still in use today. He also undertook the construction of three palaces for each of his favourite wives, one a Hindu, one a Muslim and one a Christian. An Indo-Islamic Masterpiece, Fatehpur Sikri look its resplendent best during sunset 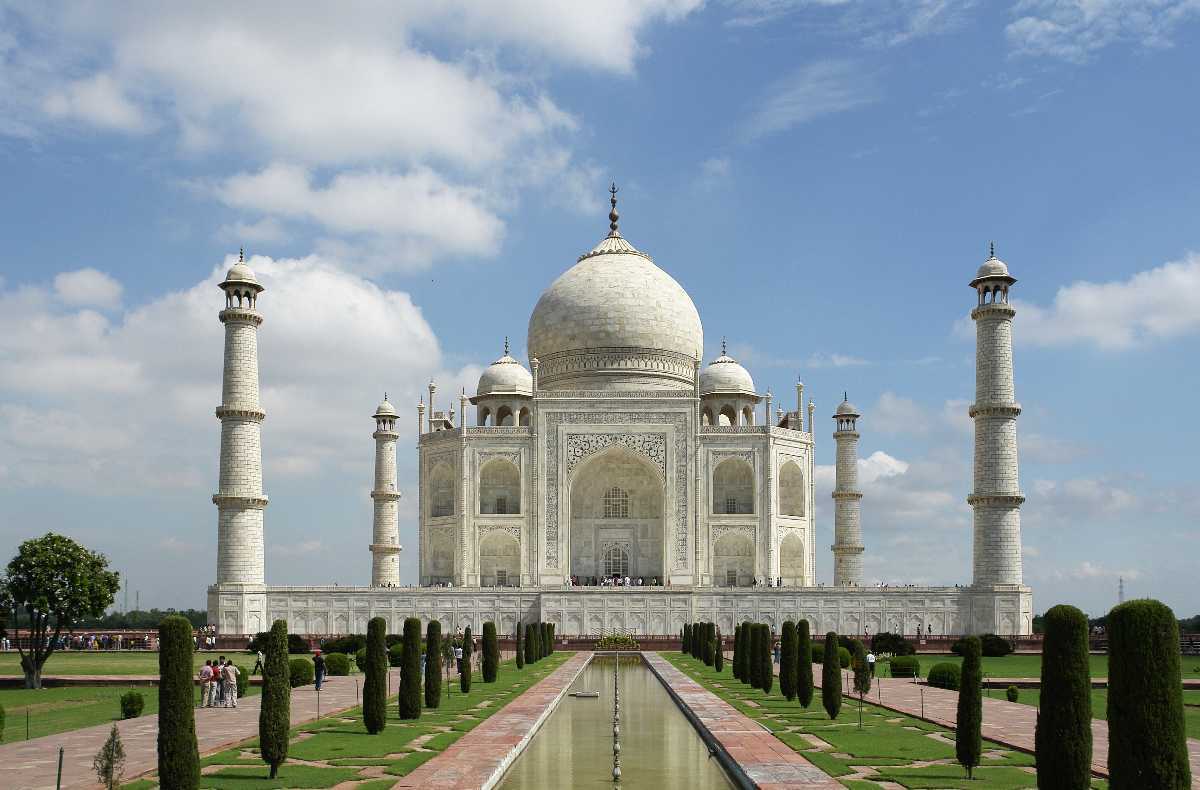 "A Monumental Ode to Love"

One of the seven wonders of the world, Taj Mahal is located on the banks of River Yamuna in Agra. It was built by the Mughal Emperor Shah Jahan as a memorial for his third wife, Mumtaz Mahal. It also houses the tomb of Shah Jahan himself. Constructed entirely out of white marble in the 17th century, Taj Mahal is one of the most beautiful monuments in the world. Every year visitors numbering more than the entire population of Agra pass through the magnificent gates to catch a glimpse of this breathtaking monument!

A UNESCO World Heritage Site, the Taj Mahal stands for the Crown of Palaces in the Persian language. The tomb is laid out in a rectangular shape and can be approached through a massive gateway which has an arch and alcoves on either side of it. There are water channels and fountains in the entrance which makes the monument even more spectacular. The reflection of this majestic spectacle in the Yamuna is almost poetic in its perfection!
Covering an area of approximately 42 Acres, the construction of the Taj Mahal began in 1631 and it took 17 years before it was completed in 1648! It was constructed using white marble obtained from Makrana in Rajasthan "An Epitome of the Mughal Dynasty"

An architectural masterpiece, The Red Fort of Agra or Agra Fort was built by Emperor Akbar in 1573. It is located on the right bank of the River Yamuna and is made entirely of red sandstone. The historical fort was once the ersthwhile residence of the Mughals until 1638. One of the UNESCO World Heritage Sites, it lies 2.5 kilometres from Taj Mahal.

Also known as Lal –Qila, Fort Rouge or Qila-i-Akbari, Agra Fort is a symbol of Agra and is so massive that it is often referred to as a walled city. It is the perfect example of Mughal art and architecture, built purely out of red sandstone. Within the premises of Agra Fort lie the most exquisite structures like the Pearl Mosque, Diwan-i I Khas, Diwan-i I Aam, Moti Masjid and Jahangiri Mahal. Some part of the Agra Fort is used by the Indian Army is off-limit to public access. View of Yamuna River and Taj Mahal from the fort's pavilions is mind-stirring. 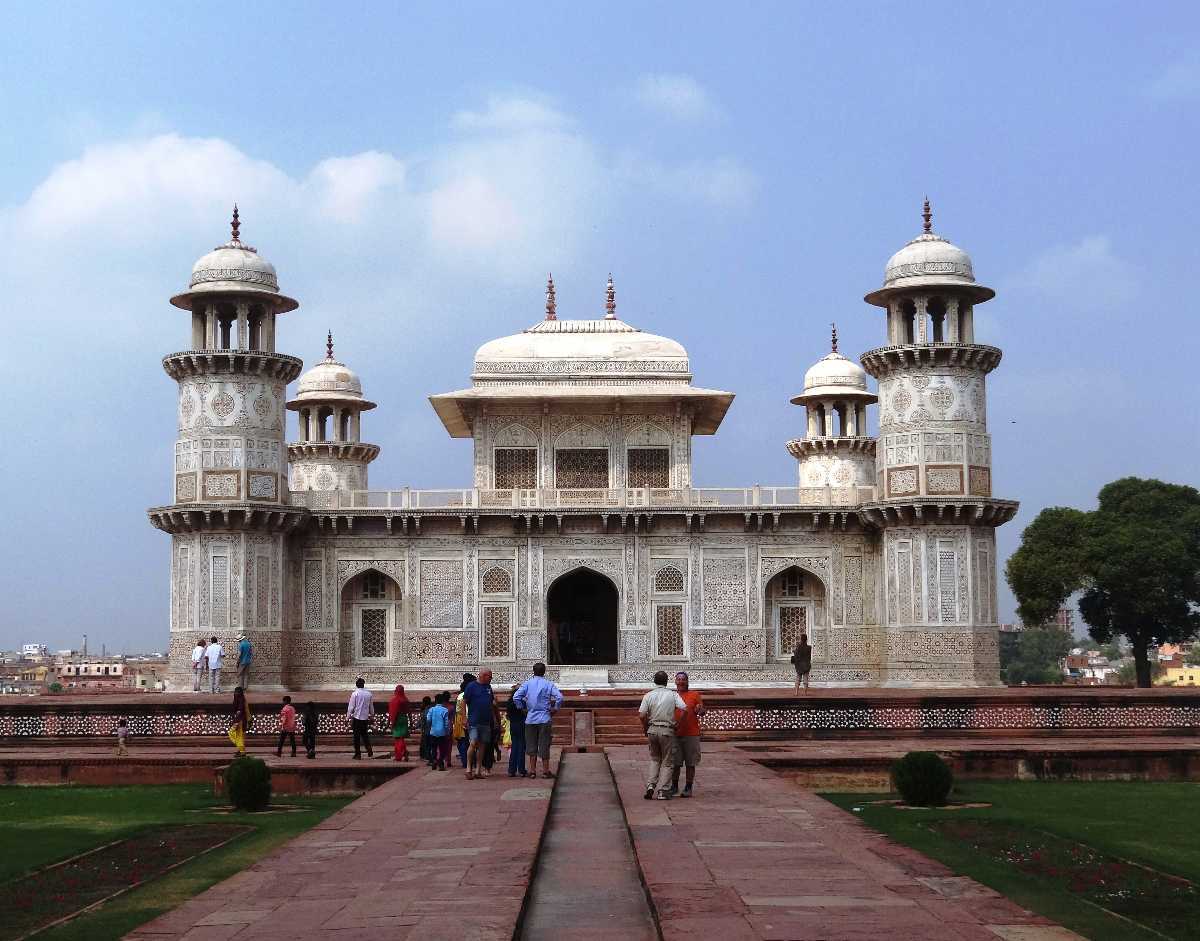 Often referred to as the "Baby Taj Mahal", the tomb of Itimad-ud-daulah is a Mughal mausoleum and often regarded as a copy of the Taj Mahal. This is the first tomb in India made entirely of marble. The tomb was commissioned by Nur Jahan, the wife of Jahangir, for her father Mir Gheyas Beg (later known as Itimad-ud-daulah), who was a minister in the court of Shah Jahan.

The tomb of Itimad-ud-daulah marks the transition from the first phase of the Mughal architecture to the second. This was the first structure to make use of pietra dura and the first to be built on the banks of the Yamuna River. It basically consists of Indo-Islamic architecture, with the use of arched entrances and octagonal shaped towers. If you take a bird's eye of Itimad-ud-daulah Tomb, it looks like a jewel box set in a garden. This magnificent mausoleum, built on the banks of Yamuna, was to inspire the construction of one of the wonders of the world "Taj Mahal" in the later years.