Gurgaon to Jaipur by Car is a wonderful trip

Amer Fort or Amber Fort is a fort located in Amer, Rajasthan, India. Amer is a town with an area of 4 square kilometres (1.5 sq mi)[1] located 11 kilometres (6.8 mi) from Jaipur, the capital of Rajasthan. The town of Amer and the Amber Fort were originally built by the Meenas,[2][unreliable source?] and later it was ruled by Raja Man Singh I. Located high on a hill, it is the principal tourist attraction in Jaipur.[3][4] Amer Fort is known for its artistic style elements. With its large ramparts and series of gates and cobbled paths, the fort overlooks Maota Lake,[4][5][6][7] which is the main source of water for the Amer Palace.

A panoramic view of Amer Fort. 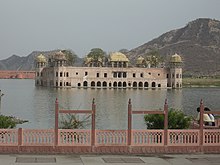 The Jal Mahal palace is an architectural showcase of the Rajput style of architecture (common in Rajasthan) on a grand scale. The building has a picturesque view of the lake itself but owing to its seclusion from land is equally the focus of a viewpoint from the Man Sagar Dam on the eastern side of the lake in front of the backdrop of the surrounding Nahargarh ("tiger-abode") hills. The palace, built in red sandstone, is a five-storied building, of which four floors remain underwater when the lake is full and the top floor is exposed.[1] One rectangular Chhatri on the roof is of the Bengal type. The chhatris on the four corners are octagonal. The palace had suffered subsidence in the past and also partial seepage (plasterwork and wall damage equivalent to rising damp) because of waterlogging, 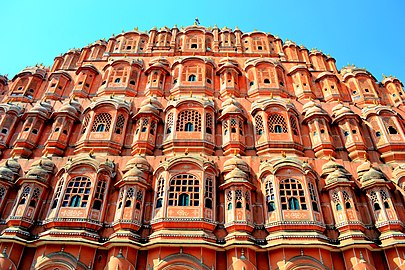 Hawa Mahal (English translation: "The Palace of Winds" or "The Palace of Breeze") is a palace in Jaipur, India approximately 300 kilometers from the capital city of Delhi. Built from red and pink sandstone, the palace sits on the edge of the City Palace, Jaipur, and extends to the Zenana, or women's chambers.

The structure was built in 1799 by Maharaja Sawai Pratap Singh, the grandson of Maharaja Sawai Jai Singh, who was the founder of Jaipur.[1] He was so inspired by the unique structure of Khetri Mahal that he built this grand and historical palace. It was designed by Lal Chand Ustad. Its five floor exterior is akin to honeycomb with its 953 small windows called Jharokhas decorated with intricate latticework.[2] The original intent of the lattice design was to allow royal ladies to observe everyday life and festivals celebrated in the street below without being seen, since they had to obey the strict rules of "purdah", which forbade them from appearing in public without face coverings. This architectural feature also allowed cool air from the V

Stereoscopic picture of the Chandra Mahal in 1903

The City Palace, Jaipur was established at the same time as the city of Jaipur, by Maharaja Sawai Jai Singh II, who moved his court to Jaipur from Amber, in 1727.[1] Jaipur is the present-day capital of the state of Rajasthan, and until 1949 the City Palace was the ceremonial and administrative seat of the Maharaja of Jaipur.[1] The Palace was also the location of religious and cultural events, as well as a patron of arts, commerce, and industry. It now houses the Maharaja Sawai Man Singh II Museum, and continues to be the home of the Jaipur royal family. The royal family of Jaipur is said to be the descendants of Lord Rama. The palace complex has several buildings, various courtyards, galleries, restaurants, and offices of the Museum Trust. The Maharaja Sawai Man Singh II Museum Trust looks after the Museum, and the royal cenotaphs (known as chhatris).